By accessing this site, you agree to accept the terms and conditions of the liability disclaimer. 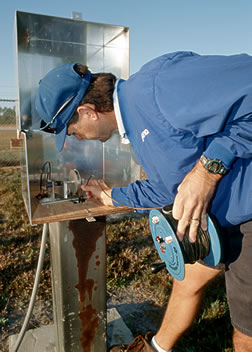 Scientists regularly monitor groundwater levels at wells throughout the state.

The Hydrologic Analysis Team (HAT) applies the most appropriate science to the modeling and data analysis to support decision making for the Central Florida Water Initiative (CFWI) and to ensure work completed is technically defensible, understood by the initiative participants and collaboratively developed.

The team’s objectives are to provide necessary modeling tools and data analysis and work collaboratively with other CFWI teams to:

The East-Central Florida Transient (ECFT) Groundwater Model is a computer model of the hydrologic system in central Florida that was developed by scientists at the U. S. Geological Survey (USGS) and modified by the HAT. This model was used to evaluate the effects from changes in groundwater withdrawals and other components of the water cycle on water levels in lakes, rivers, springs, and wetlands in support of the 2015 CFWI Regional Water Supply Plan (RWSP).

In preparation for the 2020 update of the RWSP, the HAT expanded the model to provide a single groundwater model that encompasses the entire CFWI area. The expanded model (referred to as the ECFTX v1.0 model) extend from the Gulf of Mexico on the west to the Atlantic Ocean on the east and from southern Marion County in the north to the Highlands/Glades county line in the south. The model simulates three-dimensional groundwater flow in the surficial aquifer, intermediate aquifer/confining unit, Upper and Lower Floridan aquifers, and associated middle confining units.

Uses of the ECFTX model includes:

Statistical analysis and other data analysis techniques will be used to further investigate and quantify the factors affecting water levels in lakes, rivers, springs, and wetlands. Relationships that are developed will be used to corroborate results of the ECFTX groundwater model and quantify effects of withdrawals on lakes, rivers, springs, and wetlands.

As part of developing the ECFTX v1.0 model, the districts contracted with three expert modelers to conduct independent scientific peer review as the model was being developed. This enabled the HAT to incorporate significant comments before the model was completed and thereby provided the best possible modeling tool. The review consisted of four major tasks:

The Peer Review Report of the ECFTX v1.0 Model can be found at the link below under the “Resources” section.

The ECFTX v1.0 model, originally developed to support water supply planning decisions, was later updated to make the model a more suitable tool for regulatory decisions and improve the model performance in the areas where critical minimum flows and levels (MFL) water bodies are located.  A groundwater modeling team from three water management districts (SJRWMD, SWFWMD and SFWMD) reviewed the model and identified an area within the CFWI portion of the domain where the original calibration could be improved. This area primarily included the Wekiva River springs groundwater contributing basin and Seminole County and was called the focus area. The recalibration effort was conducted only in the focus area with a goal to improve the model’s ability to better match observed water levels and spring flows. The recalibrated model was referred as ECFTX v2.0. The ECFTX v2.0 model performance was considerably improved within the focus area and aquifer parameters were adjusted within a range consistent with the known hydrogeology in the region. Accordingly, the model-wide calibration performance was also improved as a result of the improvement in the focus area. Overall, the results of the recalibration provided greater confidence that ECFTX v2.0 should be considered an appropriate tool for assisting regulatory decisions, MFL evaluations, and future planning efforts. In addition, to facilitate water use permitting evaluations, Environmental simulations, Inc. was retained by the three districts to develop a user-friendly regulatory tool by implementing Focus telescopic mesh refinement in Groundwater Vistas (a groundwater modeling package).